Stop Trident Demo on the 27th February 2016 in London 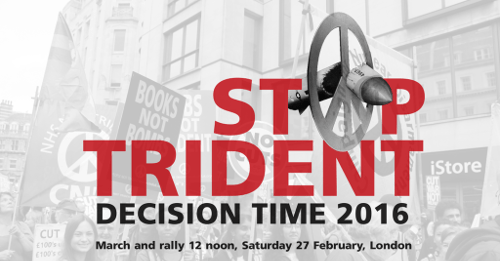 The Stop Trident demo on the 27th February 2016 could well prove to be a vital intervention ahead of the Parliamentary decision on whether to replace Trident, the UK's nuclear weapons system.

Local groups, trades union branches and supporting organisations are putting on local meetings and participating in action days to help raise awareness of both the demonstration and the issue itself. The following pages are intended to support this work by helping people to engage with local and social media.

The ”world of peace”, the international peace movements are looking at you.

You are the “avant-garde” in the worldwide fight against the modernization of nuclear weapons.

What a scandal: the nuclear weapons countries want to spend more than one billion Dollars for new nukes which can destroy our planet several times. While modernizing, every second 12 000 Children are dying of hunger and billions of people are without health care, decent education, or sanitation. In full brutality, the modernization of nuclear weapons rears the ugly head of the militarism worldwide. Militarism is war and destruction – each and every day.

Your struggle is one for peace and humanity and the peace movements in all countries are by your side. Nuclear weapons are against international law, against humanity, against environment and the right to peace. Nuclear deterrence is a political crime.

Together we can overcome the old story of nuclear weapons, of modernization and of the circle of arms race and war.

We can stop the modernization of Trident. Trident is the weakest link in the strategies of all nuclear weapons countries in the world. Your actions, your struggles of the past years have turned Trident into this weakest link. And we are here to say to you:

Continue, you can succeed!

We will support you by enlarging our solidarity, above all by increasing our fight against nuclear weapons in our countries.

You know that in Germany, thanks to NATO’s nuclear sharing, we have 20 US nuclear weapons lying in Büchel in the beautiful landscape between Rhine and Mosel. Several weeks ago we started a new campaign against the modernization of these nuclear arsenals. We will block Büchel every single day over the summer. We will demonstrate in Ramstein against the largest US base in Germany which is the command center for these nuclear weapons. With civil actions of civil disobedience, with more demonstrations, we will win the fight against the US/NATO military forces.

Your great demonstration is a big and huge support for us. It will give us new power and shows that it is really possible to develop a mass movement against nuclear weapons, that it is possible to bring many people on the streets.

Your demonstration shows by heart and facts, by emotions and words: a nuclear weapons free world is possible.

Let us continue fighting for this big goal: We can be the winners.

No Trident, no modernization. For Peace and a world free of war and nukes.